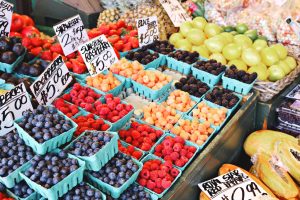 Conveniently located in the pavilion at Durham Central Park, the Farmer’s Market is the place to go for local produce, crafts, and flowers. Over 65 vendors attend the market, all of whom are located within seventy miles of Durham. Hours and seasonal offerings are available here.

An upscale grocery store with a wide variety of options and numerous locations around Durham.

Founded in Greensboro, NC, The Fresh Market has modeled itself after open European grocery stores with a greater focus on an engaging atmosphere and globally sourced ingredients.

Operating in an ecosystem all its own, Trader Joe’s offer a variety of signature items that can’t be found anywhere else.

A reliable choice for pantry and refrigerator staples at reasonable prices.

Located in a restored tobacco warehouse at the corner of West Main Street and South Gregson Street in downtown Durham, Brightleaf Square contains a wide variety of award-winning restaurants and retailers.

A short walk away from Duke’s East Campus, the Bull City Market houses a Whole Foods, along with a sushi restaurant and the Mad Hatter Cafe + Bakeshop.

Located on Hillsborough Road, the Durham Festival Center is a strip mall anchored by a Harris Teeter. Japanese, Mexican, Chinese, and Italian restaurants round out the offerings, along with a Chick-fil-a and Jersey Mike’s.

Located towards Chapel Hill on opposite sides of US 15-501, the traffic around these shopping centers can sometimes be onerous. However, many of the restaurants are exceptionally well-regarded, and a Trader Joe’s and Food Lion provide convenient grocery options.

The Lakewood Shopping Center is in South Durham, and offers two large thrift stores and a craft store.

Located off of US 15-501 next to I-40, this strip mall contains a Barnes & Noble, Best Buy, Men’s Wearhouse, Wal-Mart, Party City, Marshall’s, and Michael’s, along with various restaurants. Navigating the parking lot can be a bit tricky, but the concentration of useful stores in this location makes it worthwhile.

Running through the heart of Old West Durham, this revitalized shopping district is very popular with the Duke community. Retail outlets include several boutique, clothing, and specialty stores, while restaurants from bagel shops to steakhouses line the street. If you’re looking to spend an afternoon getting some sunshine after studying in the library, this is the place to go!

Anchored by a Home Depot and Harris Teeter, this shopping center connects directly with other lots that house a Costco and an array of new and used clothing stores.

Located where Garrett Road intersects with US 15-501, this strip mall contains a T.J. Maxx, JOANN Fabrics, and a wide variety of restaurants. Of particular note is Zweli’s, a Zimbabwean restaurant that has earned rave reviews since opening in 2018. However, the only entrance is located on Garrett Road, and can sometimes be quite congested.

The Shops at Erwin Mill are a recent addition to the greater Ninth Street district. Relatively small in scale, this area is dominated by spas, beauty salons, and restaurants specializing in many different types of cuisine.

South Square used to be a singular mall—however, after facing competition from The Streets at Southpoint, it was razed in 2004 to make way for a big box retail hub. The area has a Super Target, Sam’s Club, and Petco, as well as serving as an anchor for three smaller strip malls with their own offerings: Westgate, Regency Plaza, and Parkway Plaza.

The author of this website, who previously worked at Target, would like to make it known that, as far as Targets go, this is a bad Target. Located on a major thoroughfare near several large apartment complexes, the staff simply can’t keep up with the demand—as a result, lines are long and product availability is inconsistent, especially at the beginning of the school year.

The Streets at Southpoint

The Streets at Southpoint is, without question, the largest and fanciest mall in the area. Located to the south of Durham, it houses many specialty stores and most major mall chains including Nordstrom, JCPenny, Belk, and Macy’s. Outside, the open-air walkway contains larger retailers like Barnes & Noble, Pottery Barn, an Apple Store, and an AMC. In addition to the regular food court, upscale dining options include Firebirds Wood Fired Grill, The Cheesecake Factory, and Maggiano’s Little Italy.

This strip mall to the south of Durham contains a Food Lion and several excellent restaurants, alongside a store dedicated entirely to birdwatching supplies.